After 6 months of hard work and hard selling, Tile Tastic are now almost at the end of their business experience. It’s been a long road trying to sell, sell, sell and now the finish is nearly in sight. The group have managed to make a profit and have had some fun on the way. All would agree it’s been worthwhile and an experience that will help them when they leave St Joseph’s College.

The presentation evening at The Easterbrook Hall on 31st March 2015 should be an entertaining evening. All Young Enterprise Scotland business’ in Dumfries & Galloway will come together to present their products/services and share their experiences.  It should be a good night. 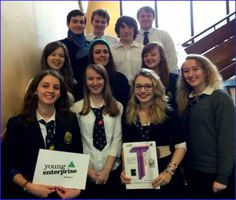 On Wednesday 26 November, fourth year pupils at St Joseph’s College were involved in the unique science themed day entitled STEM Speed-Dating Careers Event. Organised jointly by the Science and Technology department and also the Mathematics department, this event created an opportunity for fourth year students to meet, talk and engage with representatives from professions relating to Science, Technology, Engineering and Maths; which forms the acronym STEM.

When asked about the event, Mrs. MacGregor said: “Fourth year students are at a crucial point in their academic life as they are about to make extremely important decisions regarding their choice of subjects for Higher courses in fifth year.”

The aim of the afternoon was to enthuse our pupils about STEM subjects and to open their minds to the vast array of career opportunities in this field. A total of twenty-nine professionals attended, from various careers including architecture, engineering, ICT, physiotherapy, medical physics and environmental health. The event ran in the style of “speed dating”.

A group of five students had five minutes to question the guests regarding their careers. Before the event, fourth year students studied the CVs of the visitors and prepared questions with the help of the sixth year prefects who also contributed to a great day.

Many of our contributors said that they wished that they could have been given the opportunity to be involved in something similar during their school years.

Mr. A. McAdam, a Biomedical Scientist at the Dumfries and Galloway Infirmary, said: “I hope the fourth year pupils learn how interesting science is and gain a better idea of what they might do as a future career. I wish there was something like this event when I was at school – I would have known what I would have wanted to do then.”

When speaking to the representatives, the general consensus gathered was that the event offered the youngsters an insight into the various jobs on offer in the Dumfries area and beyond.

Suzanne Paterson, a Senior Support Officer for Dumfries and Galloway Council, said: “Fourth year will get to see a variety of jobs on offer in the area. They can gain an idea of what jobs they could do and see a pathway to that destination.”

In addition, pupils were required to develop their social skills by interviewing the visitors. Work experience was also praised highly as something students should invest time in.

Both the staff and the pupils, as well as our guests, enjoyed and benefitted hugely from this successful event in Saint Joseph’s College.

On the 12th of November at 4:02pm the Rosetta mission’s lander Philae landed on the surface of a comet. To celebrate this pupils and staff from St Joseph’s College, took part in a Space and Sci-Fi quiz. The event was run by Physics teacher Mr. Rossi.

There were 5 rounds consisting of categories such as Star Trek, Star Wars and Cosmology. Each round had 5 questions with a bonus point up for grabs. At 4:00pm the quiz was stopped to watch the European Space Agency control centre’s live stream for conformation that Philae had landed.

The winners of the quiz received some chocolate and then all of the other teams did too. The pupils’ thoroughly enjoyed the event and are keeping track of Philae’s movements.